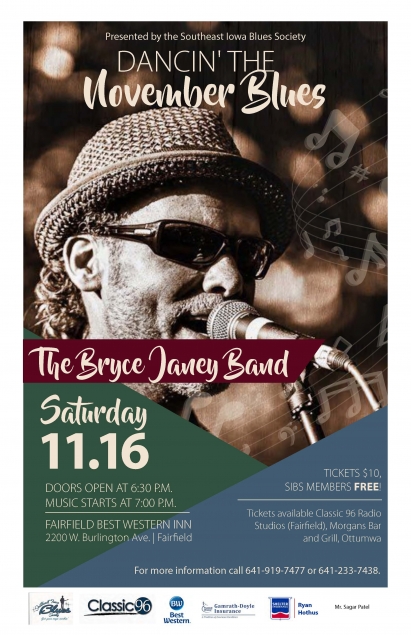 Mark your calendar for Saturday night November 16th, for the Southeast Iowa Blues Society Members FREE event. Iowa Blues man Bryce Janey will be bringing his band to Fairfield, for your dancing and listening pleasure. Bryce has performed onstage with Kenny Neal, Buddy Guy, Tab Benoit, and including the late great “Queen of the Blues” Koko Taylor.
While still in The Janeys, Bryce began a solo career and released his first CD, Practice What You Preach in 1995. Since then, he has released many more CDs, most of which have gained national attention including a five star rating from Blues Access magazine, as well as stellar reviews from Blues Revue and Living Blues. Bryce Was Inducted into the Iowa Rock-n-Roll Hall Of Fame in 2007. Since 2011, Bryce has released four solo electric CD’s on Grooveyard Records (Rochester,NY) featuring his outstanding blues/rock guitar slinger riffs and original songs. Bryces albums have been described ed as ”Phenomenal, top-shelf, world-class, soul-powered, retro-70s bluesy heavy guitar with ‘six string mojo’ that truly delivers on all levels of greatness,” and that “this is Bryce Janey’s finest hour and he stands tall in the supreme blues/rock guitar world.”
If you have friends who really should be members but have not yet joined SIBS, tell them about this event, encourage them to come for a taste of the blues, only cost non-members $10. Or better yet, they can sign up as a member that night for only $20. As a member, the discounts that we have given over the year would pay for a single membership–the math makes sense to be a Member, and your friends should know about this. Doors will open at 6:30pm, see you there.

Toronzo Cannon Rockin In the Blue Year, Saturday night December 28 at the Fairfield... Scroll to top